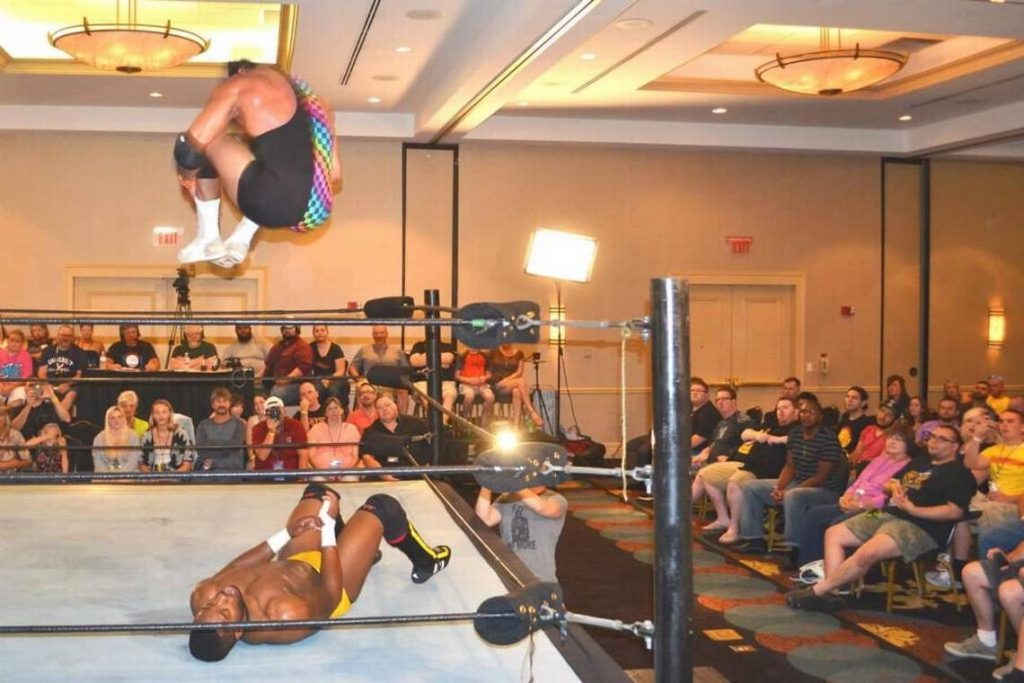 One thing I do miss about being away from the WWE developmental system is seeing “The American Dream” Dusty Rhodes on a daily basis. It was never a dull moment or conversation when Dream came to the office. I grew up watching and learning how he interacted with various people and getting to work with him in a close, personal setting was a lot of fun.

I still talk to Dream regularly via phone and he never fails to come up with something that will resonate for days. Today he gave me this gem from Wyatt Erp:

“Nothing matters more than blood. If they’re not family, they’re just strangers.”

So obvious, so Dream, so true…

The Dream still has an aura and way of choosing his words. He’s the last of a breed that no longer exists. History is written by the winners. Accurate or not. Dusty Rhodes legacy is unique and he will be remembered as one of the all time greats of professional wrestling/sports entertainment. I enjoy our conversations and rhetoric more than ever.

We may not be blood or family but I do believe we’re friends. As much as you can be friends with someone in this business. We’ll listen and shoot the breeze and that’s it. I don’t want anything from him and he doesn’t want anything from me. There comes a time when you just want to talk or tell stories. And Dream has plenty of stories…

I saw some friends in Charlotte over the August 1-4 weekend. I spent the majority of time in the room where we held the training camp, although I did have a chance to briefly check out the main hall and say hello to people I haven’t seen in years.

The camp was what we expected. Les Thatcher, Gerald Brisco, Tully Blanchard, Leilani Kai and I saw some kids with a variety of experience looking to get better, gain knowledge and hear something to help them get where they want to be. This was cool because we were going to have the person who stood out and excelled the most presented with a $2500 Scholarship in honor of Reid Flair at the end of the four days.

The winner was judged by attitude, ability to follow directions and overall in-ring appearance and perception. Common sense seems to be missing with a lot of independent wrestlers these days and that’s an element needed to be successful. Fans with VIP access were able to come in to watch and listen all four days.

The winner was a young man from Canada named Michael Blais. He wrestles under the name Michael Richard Blaze. If you get an opportunity, check him out.

Promoter Greg Price did a tremendous job getting an array of talent past, present and future together in one place. It was cool seeing a lot friends and aquaintances from my past.

I watched Ox Baker as a kid growing up in Houston and later wrestled him in Los Angeles at The Olympic Auditorium. I saw Ox sitting on the couch as I walked to the seminar and he hadn’t changed a bit! If there was anyone who looked the part of a scary, nasty villain, it was Ox Baker. He was a character in and out of the ring.

My old friend and former manager Jim Cornette lost a lot of weight, was tan and well rested when he walked into the hospitality room Friday night. The old cliché “Hell froze over” was never more evident with JC as he was calm, cool and collected after taking months away from the wrestling business. He began eating better and lost close to 60 pounds! He looked and sounded great. I was happy to hear he and Stacy were both taking better care of themselves and becoming a lot more ‘stress free.’

I think being away from the business was a huge factor in JC’s stress reduction. JC, along with Bobby Eaton, Dennis Condry and Stan Lane (The Midnight Express) were inducted with their nemesis Ricky Morton and Robert Gibson (The Rock and Roll Express) to the Mid Atlantic Hall of Heroes Friday night.

I’ve known Magnum TA for over 30 years when we both were rookies in Texas. It was great catching up with him and another guy who was a veteran and mentor to us both, Tiger Conway Jr.

Tiger Conway Jr, Manny Fernandez and Chavo Guerrero Sr. mentored and helped TA and me early on and we never forgot it. The only one missing was Chavo this weekend. I got to speak briefly with Tiger and Manny but it was a hectic few days, early mornings and late nights.

I reminded Mr. Wrestling II about the time we wrestled in Carrolton, GA. I was a young punk trying to show how much “fire” I had, so I went behind II and before I knew it he took me down and whispered “That’s a good way to get yourself pinned son.” I made my first TV taping in Shreveport in 1979 and the booker at the time was Buck Robley. II was there and I remember he wore his mask in the dressing room and even took a shower with it on! After doing four tapes Buck asked if I wanted to work that night. Of course I did…

I parked my car at the hotel the boys stayed at and rode to the town with Buck. Lord Jonathan Boyd and Wrestling II rode back with us. Finally he took his mask off and smoked a pipe on the way home. It was an entertaining trip, to say the least!

I pretty much stayed in the training area and on Sunday, “Wildfire” Tommy Rich stopped by to say hello. Tommy was one of the most popular wrestlers in the early 1980′s who knew how to tell a story in the ring. I made a lot of trips with Tommy, Brad Armstrong, Nick Patrick and Johnny Rich back in the day. We wrestled 6-7 nights a week and had a lot of fun…

DOC (Luke Gallows), D’Lo Brown, Scotty Riggs, Sick Boy, Lodi, Bobby Fulton, Mike Jackson, Jerry Jarrett, Tommy Young and others I crossed paths with here and there made the weekend special and I don’t think anyone was at a loss for words.

I take my hat off to Greg Price for making the Charlotte Fanfest happen. Dealing with the personalities and logistics of such an event is a huge undertaking and Greg pulled it off.

I hadn’t seen Tully Blanchard in years. I wrestled him in Texas when I was an extremely young greenhorn. I didn’t fully realize what he did until later but he made me look a lot better than I ever was. I wrestled Gerry Brisco a couple times but got to know him better during my time in WWE. I’ve known Les Thatcher since I started in the business. I wrestled for Georgia Championship Wrestling and Les ran the Ohio tours during that time. Later we worked together in the developmental system for WWE. I’d met Leilani Kai in passing through the years in various territories.

We all came together and coached some talented people for 4 days. It was cool to see familiar faces who understood the basic fundamentals and communicate with passion the object of what professional wrestling/sports entertainment is.

We were all busy and I enjoyed myself. Next year is supposed to be Greg’s last Fanfest. Can’t say I blame him. It takes a lot of work to pull off a gathering of this magnitude. Is it all worth it? It’s great seeing old friends and aquaintances and many who attend feel the same way. Unfortunately, there will always be some who find it necessary to take advantage and revert back to “carny mode” and screw things up for everybody else. I know many fans and wrestlers will miss it.

I know I will. I hope I get an invite to come back in some capacity.